Immediately after the declaration of the outcome of the BrExit historic referendum in the United Kingdom, the global stock markets reacted, sharply and harshly, showing an extreme sense of anxiety. Global economy went through a sudden fall of approximately $3.0 Trillion in paper wealth within a short span of two days.

When I compiled the data for the 14 global stock markets, very interesting scenario appeared which is tabulated and analyzed below.

FTSE 100 stock index fell by 5.615% during the period; June 23 – June 27, 2016 which is, apparently, natural as stock dealers and investors are normally more sensitive to the events around them. Unexpected BrExit proved to be a shudder for them and the decline in just 2 days was harsher than that of the Great Global Financial Crises 2008.

If the stockholders had analyzed the changing scenario a beneficial one for the Britons, the stock exchange evening would have been totally different, rather a pleasant one. On the other hand, the sudden global breakdown of financial and stock markets proved that their worst nightmare was true. Whole the World, collectively, identified the sensitivity of the upcoming story and tried to show the Britons the true picture, which they could not realize before the June 23.

The 5 top and peer stock indices analyzed were: The 5 top and peer stock indices analyzed were: 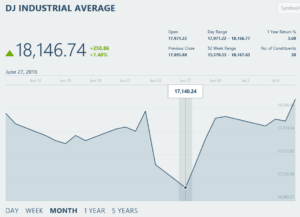 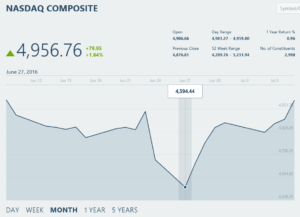 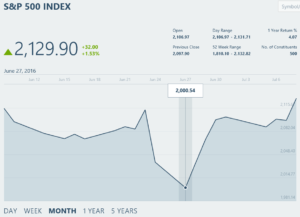 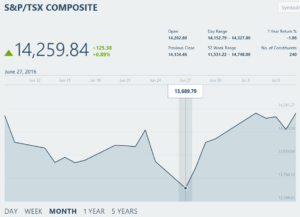 The response of stockholders in North America was reflective of the long time allies. The fall of overall 4.834% during the June 23 – 27 was significantly lower than that of British Stock Market, indicating that Americans behaved more cautiously and thoughtfully. The long-tested bonds between United States, Canada and the UK are not only about the economy, defense, culture, political system, language, international politics but are also future-oriented. Against expectations, lower and restraint caution by Canadian stock market of 3.125% is puzzling. Despite being in the same Common Wealth of Nations and governed, nominally, by the same Royal Highness, Canada neither felt the tremors nor reacted abruptly.

Being in closely knit business and corporate links, disturbance vibrations jolted the American stocks as well. NYSE Composite and the NASDAQ looks to be in more profound mode than the FTSE 100 stock investors. The centuries old corporate partnerships were there to stumble due to anticipated perils which were not fondled by the British electorates but by the American investors. 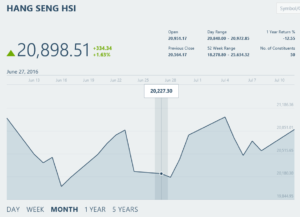 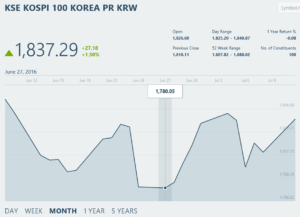 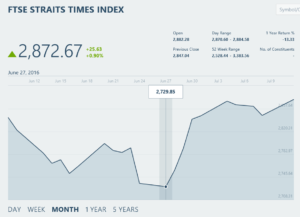 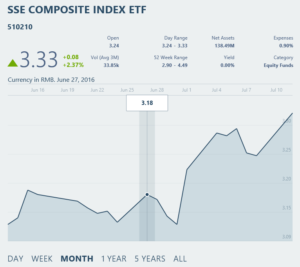 As expected, Asian financial markets were somewhat indifferent to the startling and sudden change in the far-flung Europe except Nikkei. As a whole, the Asian stock markets fell by just 3.688% in the similar trend but Nikkei had a faster fall of 5.722%, as compared to the Asian trend – even higher than FTSE 100 of UK. On the other hand, Chinese stock prices rather increased by 1.430%.

European Stock Exchanges Felt the severity of the Shock, desperately. Their unexpected and un-predicted comportment was a thing of wonder for the common Britons. The European Stock Indices were: 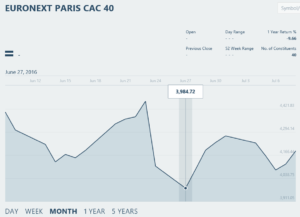 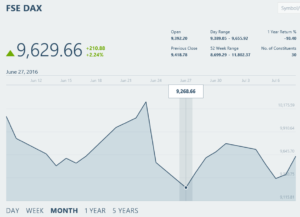 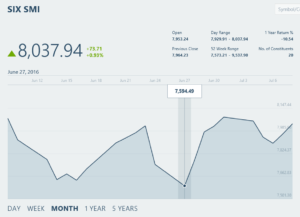 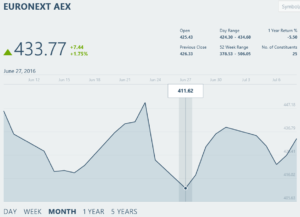 As the real partner and the competitor at the same time in the game, the European investors were stunned, rather traumatized by the fallout of the referendum results. No one was anticipating such harsh rejoinder from the UK voters as even the David Cameron, the UK Prime Minister, could not foresee such dramatic turnover.

I took these 4 stock indices; 4 were the major ones and one a somber one. Their average fallout was 8.560% which is approximately 34% higher than the FTSE 100, the major British financial indicator. It was a general babble in the GB that France is the major hindrance architect for the UK but against the expected behavior of the UK commoner, the France was so much depressed by the consequences of a referendum that its stock index fell by 10.761%, the highest in the World. The Same response was from the stock markets of Germany which fell by 9.363%.

The remarks from the German and French envoys to not to give UK any other chance to rejoin EU was not only a threat to the UK to rethink the decision but also merely a face-saving move.

SMI was disturbed but didn’t over-react.

All events on one side but one thing is clear; the World thought it to be an emotional and sentimental decision as the stock markets, around the World, returned to the normal, rather excelled the previous ones. Only French CAC and German DAX could not come to the previous scale though they recovered to a great extent.

The Gallery of Screenshots of Indices, as on June 27.

Is financial and corporate World looking toward the UK Parliament to rethink the decision? Decision of future is awaited!

Tags:
BrExit, Global, Hit, June 23, Markets, Stock
Facebook Twitter Email Pinterest linkedin
Newer How to Always Keep Wi-Fi On During Sleep in Android 6.0.x Marshmallow?
Back to list
Older How to force 3G/4G only on any Android 6.0 marshmallow device easily